REVIEW - UNIX for Programmers and Users 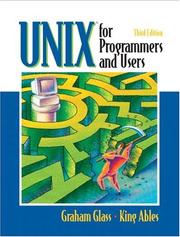 UNIX for Programmers and Users

One may ask, with all the GUI interfaces available on UNIX systems these days, does one need to know UNIX commands such as ls, cat, pwd, mv, etc? There are a number of answers to this not least that it is often quicker to use the UNIX command line and if one is using Telnet to access a remote system all one has is the command line.

The first eight chapters are for all users covering logging in, passwords, filenames and paths, file manipulation and access, utilities, networking, etc. with chapters devoted to the Bourne, Korn and C shells. There are then two chapters aimed at programmers covering C and system programming followed chapters on UNIX internals and system administration (for the system manager). Each chapter starts with a section indicating prerequisites (what you need to know to read the chapter), objectives (what will be covered) and a list of the utilities, commands or systems calls covered. Each chapter end with a review, a self test, exercises and projects (which the reader can use to test their grasp of the topics covered). There are plenty of examples together with screen dumps showing expected output.

A useful book for users or programmers to learn about UNIX commands and as an introduction for systems administrators. Clearly administrators will need further information covering the particular variety of UNIX, hardware platform, network stacks installed, etc. Also worth considering by students on Computer Science or IT courses where extensive use will be made of UNIX at the command line level.