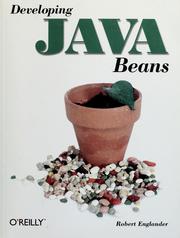 A well written second level text which concentrates on the JavaBeans API; the reader should be a proficient Java programmer.

The JavaBeans API defines a software component model where Beans are lightweight components, which can be reused, in complex applications. The majority of new Java texts mention the API but tend to concentrate on APIs such as the AWT and networking.

The three most important aspects of a Bean are properties (the named attributes of a Bean which define its state, i.e. private instance variables), methods ('normal' Java methods which present the public interface of a component) and Events (Java 1.1 events being the means by which components communicate). After a brief introduction to components and the JavaBeans architecture the text moves directly to the Event model, Event Adapters (which provide flexibility for event handling), properties (design patterns, accessor methods, etc.), Bean persistence (storage using object serialisation), JAR files (to package Beans for network transmission) and the BeanBox tool used to test the functionality of Bean. There is then a substantial example which builds a temperature control simulator (starting with a specification of requirements and moving on to implement all the Beans, support classes, JAR file and a sample applet). This is followed by a discussion of introspection (with BeanInfo classes implemented for the simulator), property editors (used by visual editors for Bean editing) and customisers (interfaces to cus-tomise Bean behaviour/appearance). A final chapter describes the JavaBeans ActiveX bridge, which allows Beans to be used in ActiveX components.

A well written second level text which concentrates on the JavaBeans API; the reader should be a proficient Java programmer. Suitable for anyone wishing to build reusable components using the JavaBeans architecture and Java APIs.