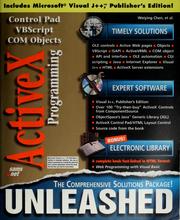 I requested this book on the assumption that it would be a book about how to write ActiveX components such as Automation Severs or OLE Controls. In fact, it turned out to cover all aspects of ActiveX, from writing controls to creating active documents. The chapters are divided into six parts; an indication, perhaps, of the way the focus of the book has been fragmented.

The first part contains chapters giving an overview of ActiveX (which I thought was too short) and chapters on how to program to create COM Objects, OLE Automation Servers and OLE Controls. Frankly, I don't think these are subjects to which you can do justice in only 170 pages.

The second part covers ActiveX Scripting, including both VBScript and JavaScript. The third part covers Active Web Pages, including a short chapter on using Microsoft's FrontPage editor and ActiveX Control Pad, an environment for authoring web pages with active content. The fourth part, on ActiveX Server Framework covers the use of Win CGI Scripting and the Internet Server API.

If you are interested in virtual reality, the fifth part is a smallish chapter giving an introduction to the Microsoft ActiveVRML control. The book finishes up in part six with a couple of chapters on Active Documents and the use of OLE Document Objects and hyperlink navigation.

To be honest, although parts of this book are quite good, I think it falls into the trap of many books these days by trying to be too much of everything. In the end, it becomes not enough of anything. If you are interested in all of the above subjects, this might be a good introduction. Otherwise, you will probably be better off buying books that cover the individual subjects in more detail. It isn't a bad book, but it isn't a great one, either. I couldn't really recommend it.