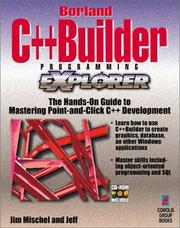 This is a beginner's book introducing both the C++ language and the Borland product. It has two writers taking alternate chapters, Jeff Duntemann dealing mainly with C++ and Jim Mischel with C++ Builder.

It is not always very good as an introduction to C++, but to be fair the authors clearly only intended to introduce language features that are relevant to the following C++ Builder discussions. That being the case, it is annoying to have prominence given to C strings when C++ Builder has its own string type (which they go on to describe and use) and of course the standard C++

is available. The authors make it very hard to introduce aspects of the standard library even if they wanted to as two paragraphs in a section on units and header files in chapter 8 state that namespaces are beyond the scope of the book. This was ample room to explain their primary use, which is common throughout C++ Builder.

The explanations of object oriented programming are sometimes weak. It is frequently referred to but, for example, they advocate the use of public data members and some of their illustrations seem dubious. Suggesting that a floral arrangement could be derived from a vase is one such case, but this is followed by a good piece on the C++ Builder class hierarchy in chapter 10.

This is a somewhat inconsistent book where the interwoven C++ Builder explanations and examples are often very good.

After the first half things begin to pick up. The chapters on files and graphics are good and the 120 odd pages on databases are very good. This is much better than the rather confusing product documentation. The use of database controls is explained very well. This and a section on SQL make you feel that the writers are much more at home in this territory. The use of exceptions is recommended but C++ Builder's Exception class hierarchy is unused.

Finally there is a strange 'bonus chapter' which is an extract and therefore an advert for a book on Delphi and there is a CD.

My overall objection to this book is one of style and therefore a matter of taste. The authors introduce each chapter and frequently sink in to what they describe as 'homey metaphors'. It is a computer book inspired by Garrison Keillor. However, as books of this kind usually end up as quick reference guides and reminders of techniques that are particularly hard to remember their style becomes less and less important.