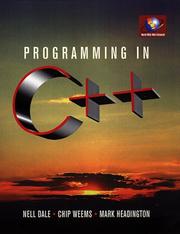 This book is eight years late. By that I mean that it is about C++ as it was at the end of the eighties and pursues a design methodology that suited that decade. This is about structured design based programming using C++ as the programming language. The authors deliberately avoid templates, exceptions, operator overloading and much more.

What they have produced is an above average book once you accept their presuppositions. Of course they only list 48 of the 74 keywords and the appendix on the C++ Library Routines is nothing of the sort, it actually lists part of the contents of seven Standard C header files (there were 15 in the 1989 standard). I agree with their assertion that the C++ standard library provides a wealth of functions, named constants and specialised data types, you just won't find any of them here, just some of the C ones.

If you study this book you may learn (slowly and tediously) the fundamentals of structured programming however you will not learn C++ and you will not learn object-orientation. That latter takes much more than a single brief chapter tacked on to the end of a book that otherwise avoids the topic.

Books like this one do students little good. The best realise early on that such texts belong in the past and the rest discover this when they try to hold down a job on the strength of what they have been taught.

I begin to think that one problem that we are having is that many academics are so far out of touch that they think that what is needed is better expositions of old methods. What we need good expositions of current technique. Object-orientation is nothing new and there is a wealth of evidence to show that it is worthy of study. I believe that C++ isa perfectly satisfactory vehicle for that study but books such as this one will instil a view that will make it doubly difficult for users to use the language in the ways in which its designers intended.