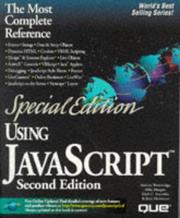 This is one of those big fat blue books that won't sit open on your desk. The cover calls it 'The most complete reference' and its coverage is certainly broad but not terribly deep. To be fair, the author admits as much in the 'Who should read this' section. It also does not attempt to teach you C++, but the reader is referred to the CD e-book C++ by Example , which is a poor book that is many, many years out of date.

The author is fairly honest about what has been updated for v5. She doesn't claim to have rewritten all the code to use templates, exceptions, the STL, the string class, or bool. It would be a much better book if she had. The new and rewritten chapters are a disappointment and clearly haven't seen as much effort as the rest of the book. Some of text and titles still refer to VC4.2. The appendix on Visual Basic Script (VC5's macro language) seems to have been lifted from a book on the Internet. There is no help on writing macros or using the Add-in Wizard to extend DevStudio. The section on the Enterprise edition tries to cover SQL, Transaction Server and Visual Source Safe in 20 pages, which is pointless. The STL is given an insultingly short overview (two pages) and bizarrely the only example given is

. The section on exceptions and templates only shows the author's ignorance of these subjects.

This book will certainly get you familiar with the MFC, ActiveX and Internet and Database programming the Microsoft way. The CD e-books from the 'Special Edition using...' series cover HTML, MFC/ATL, ISAPI and ActiveX in more depth and seem up-to-date. The source doesn't occupy too much of the book and is on the CD. All the examples I typed/loaded worked. The coding quality isn't great but the layout and style is readable (a gold star for not using K&R style braces :-)). The author's writing is clear but a bit mechanical.

There isn't much to make this book really stand out. However if it covers the topics you want to the depth you need then you could do much worse (but probably better). This book is available to read online at the Macmillan web site's Personal Bookshelf (http://www.mcp.com/) so you can have a look and make up your own mind.