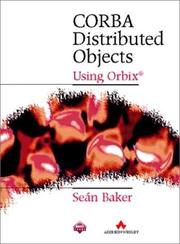 The book is reasonably priced and is the first truly intelligible guide I have seen to cover the mechanics of writing CORBA systems.

Many books on CORBA claim that software components will solve the traditional problems of building complex systems, but omit to explain how such components can actually be written. This book is refreshingly different and describes all the steps required in implementing CORBA clients and servers. On the other hand you should be aware that this is not a general introduction to CORBA, why you might want to use it and how it compares with other middleware. If you are looking for more general information, the Orfali books fit the bill, e.g.

The text is clear, though there seems to have been a certain amount of editorial carelessness (the occasional spelling mistake, scrambled sentence etc). Some of the material is repeated, though I actually found this helpful since there is quite a lot of CORBA specific terminology to get used to.

The core of the book describes CORBA IDL and the C++ code generated for client and server. A single straightforward example runs through the book. This makes it easy to follow; though I think some subsidiary examples would have added some more interest. I couldn't find the actual code on the Iona Web site, but excerpts from the book (including much of the source) is available athttp://www.iona.com/profserv/book/. A further example is covered briefly at the end of the book.

One aspect I think particularly useful is a full treatment of storage allocation and deallocation. It's crucial in a distributed architecture to know who owns the data! Although the book specifically covers the Iona ORB and related products such as OrbixTalk, it is always clear which features are CORBA compliant and which are Orbix specific. Major areas covered include both static and dynamic calls, use of the Interface Repository, Naming Service and other CORBA services.

The book is reasonably priced and is the first truly intelligible guide I have seen to cover the mechanics of writing CORBA systems.