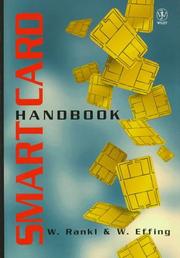 It isthetechnical smart card handbook against which all others will be measured.

What do the smart card industry and FreeMasonry have in common? To join either 'club' one must play by rules that are set out in documents that are only available to members of the club! In the case of smart cards there is much secrecy because the cards deal with financial transactions or things of value such as GSM phone codes. Making or programming smart cards can be a 'license to print money' so there is much security in the design of the cards, their software and the establishments that make them. Although these cards use published National, European and International standards the standards are both expensive and not the most readable documents. To make matters worse they often reference each other so to do anything one must obtain most of them.

The Smart Card Handbook is an introductory look at smart cards that is very readable. It gives the history (they have been around for 20 years now!) and the salient points of smart card systems. The book covers the protocols (T=0 and T=1), message sets, data structures and file systems, GSM and banking applications, an over view of the ciphers used (DES/RSA), manufacturing and application design.

However to be able to really work in smart cards one will need all the standards, membership of one of the clubs and a lot of money. This book will take one some way up the learning curve far faster than just the standards which is why, to my personnel knowledge, more than one company involved in smart cards has bought copies of this book for staff to read despite having all the standards to hand.

There is a complete list of standards and what they apply to as well as a full list of the standard commands (some systems use proprietary commands that are not listed) and also a coding guide for the commands.

There is a free Smart Card Simulator that can be obtained by post from the publishers. (Win31 and Win95 only) This has a nice interface, on a par with commercial SW but is crippled to the point of being annoying if you have used commercial SW. It is obviously a first cut, I hope that there is a free upgrade with fewer greyed out features. The SW is just icing on the cake and is not required to use the book.

I know engineers who work with smart cards that have personally bought this book despite having all the standards to hand at work. It will not permit one to start writing smart card applications immediately or, more importantly, let one hack in to a card but it is a complete introduction. In many areas is gives as much information as the standards.

The target audience is any one interested in smart cards. It is simple enough for beginners, comprehensive enough for developers. Without the opportunity to obtain a review copy I would have bought a copy of this book. It is the technical smart card handbook against which all others will be measured.