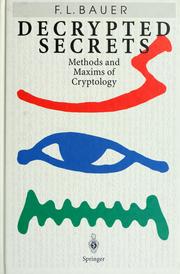 If you are interested in this subject I would have no hesitation in recommending this book.

The first part of this book looks at cryptography; that is the transformation of understandable information into a form that can only be understood by the receiver. The author initially looks at open codes. That is information that can be easily read but contains a hidden message. There are many variations just on this method. For example marking characters in a newspaper with invisible ink or by writing in such a way that certain letters stand out to the person receiving the message. If you are interested in modern methods both DES (Data Encryption Standard) and RSA (named after the people that devised it) are both covered. Part one of the book ends with a discussion on encryption security and the political and moral issues that encryption raises.

The second part looks at crypto-analysis, that is the process of trying to break a message that has been coded. Discussions include why it is normally impossible to carry out an exhaustive search of all possibilities in order to decode the message and how techniques such as the frequency of the letters in the English language can help the code breaker.

In taking us along these two paths, the author covers a wealth of material and gives a good historic background to many of the subjects discussed.

If you are interested in this subject I would have no hesitation in recommending this book (depending on the price - which was not available to the reviewer).