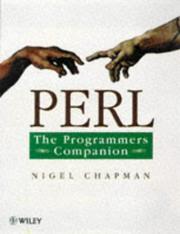 What is Perl? Why would a C/C++ developer look at Perl? The short answers are that Perl is an interpreted programming language and the back cover states 'A programmer can easily put together short Perl programs to perform tasks that might otherwise require hours of development effort from a team of specialists-and it's free!' Perl, invented by Larry Wall and currently at version 5, started as a Unix tool (similar to awk, sed and grep) but has now been ported to many other platforms. The author describes the latest version and introduces Perl as a general purpose programming language rather than as a Unix system administration tool. To that end, the book is structured around 'template' programs, useful utility style programs that make use of Perl's pattern features and implicit arguments. The content is not a tutorial for beginners, it assumes some programming knowledge and covers some of Perl's more advanced features such as 'closures'. The book is well laid out and clearly presented, with the author also introducing his syntax diagrams, which I personally found rather useless but some may appreciate them.

Perl has a devoted band of followers and is steeped in Unix traditions (obscure command lines!), however, this book also shows that it has a place as a general purpose programming tool - for utilities. Windows' programmers would find the syntax rather obscure, but there is a Win32 port available for devotees. The book is useful as an intermediate level introduction to Perl, for existing programmers, but only the persistent (or Unix command line lovers :-) will be converted to the joys of Perl.