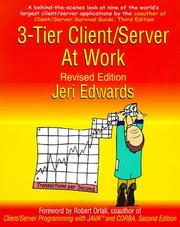 ★★☆☆☆
3-Tier Client/Server at Work is a general introduction to 3-tier client/server. It begins with a five-chapter section (part one) which gives an introduction to some general principles (TP Monitors, OTMs) and tools (Tuxedo, M3) for 3-tier client/server. The bulk of the book is devoted to the second (and probably most useful) section of the book (part two) which contains nine case histories of successful 3-tier client server projects, many of them very large-scale projects. This gives the reader a good opportunity to compare the various possible strategies and product choices. (Although this falls down a bit for Tier-2, where all but one system uses Tuxedo. Not surprising given that the author works for BEA, the company that develops Tuxedo.) The last section (Part 3) is a single chapter giving the 'Zen of 3- Tier', which consists largely of various items of 'good advice' form the experts.

'3-Tier Client/Server at Work' is a revised edition of the book '3-Tier Client/Server' reviewed in C Vu 10.5 and the comments in that review are still valid for this edition. This edition of the book has the same overall structure; the main difference is the addition of three extra chapters. In part one, there are two extra chapters. One is titled 'OTMs: The Next Generation TP Monitor', which discusses Transaction Monitors built on Objects Request Brokers (ORBs). The other is titled 'M3: Inside an OTM', which is BEA's combined TP Monitor/ORB. The other added chapter is in section three, where the new chapter '3P Keeps Hong Kong's Busy Port Ship-Shape' adds an additional example of a 3-Tier Client/Server project to the eight in the previous edition.

If you already have the earlier edition then you probably wouldn't want this one too, unless you were particularly interested in OTMs or M3. (In which case, there are probably better, more specific books available). If you don't have the earlier edition however and are looking for a reasonable, not-too-technical introduction to 3-tier client/ server, then this book is fairly good value.