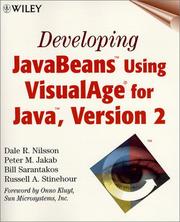 I would certainly recommend this book to novice visual programmers.

JavaBeans is a portable, platform-independent component model written in the Java programming language, enabling developers to write reusable components. Various components can be used together to develop many different applications and applets.

An example of a JavaBean component might be a self-contained Calendar GUI widget that displays the current month in a small popup window allowing the user to select a date. To integrate a JavaBean into your own application you only have to know its API; you don't need to understand its inner workings.

VisualAge for Java (VAJ) is IBM's repository based visual integrated development environment. Visual development is based on using the mouse to click and drag connections between JavaBeans and selecting appropriate actions and properties from popup menus. In this way an application can be created without having to write reams of code.

'Developing JavaBeans using VAJ' is a step-by-step tutorial to this way of programming. It begins with a Hello World applet before moving onwards, explaining how to build the GUI for an advanced calculator and the invisible bean for the back-end logic. The final third of the book covers a more complex applet and application. Two chapters are also included explaining how to use the integrated debugger and deployment of finished applications.

The pace of the book seems well judged for someone new to visual programming, although it provides little insight into the JavaBeans concept. This is definitely a how-to book, not a why-to book. There were a few confusing typographical errors such as referring to a bean by one name and then using another name a few sections later. Explanations of tasks were also sometimes displayed as bullet points, then later repeated in paragraph style.

This edition of the book covers VAJ 1.0 and comes with a CD containing a copy of the free VAJ 1.0 Entry Edition. However the new edition published in March 1999 covers version 2 and includes the Enterprise Edition on CD. If the publishers have ironed out the errors mentioned above, I would certainly recommend this book to novice visual programmers.