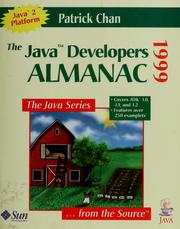 If you are a serious Java developer I think you need this book.

Reviewing this book is like reviewing a dictionary, difficult because even the most ardent reviewer is not going to read it all. I am going to break with my normal form by quoting a substantial part of the author's preface. I think you will see why.

There was a time, not long ago, when I intimately knew all of the Java class libraries. I knew how it all worked and exactly how everything fit together. I knew what subclassed what, what overrode what, and so on (of course it helped that I was one of the original developers :-). But aside from the occasional inability to remember which argument of Vector.insertElementAt() is the index, I rarely had to refer to any reference documentation.

With 1.1, my mastery of the Java class libraries was reduced to half. This left me feeling a little disoriented since I no longer knew my way around , and the increased size of the libraries exceeded my ability to recall the details of the signatures. When I took a peek at version 1.2, I was initially thrilled by all the new functionality I would now have at my fingertips. But as I browsed the new classes, I began to realize that my expertise was being reduced to just a tiny fraction. I felt lost in this wonderful but vast sea of classes.

Since I make my living writing Java code, it was important that I find an efficient way of "navigating" the new libraries. What I wanted was a quick overview of all of the libraries; something that covered every class and briefly showed their relationships; something that would allow me to explore and quickly learn about the new packages. This need led to this book.

This is not a book to learn from in the more conventional sense. Think of it as a dictionary with minimalist definitions and you will not be far wrong. If you are a serious Java developer I think you need this book. I think that need says a lot about what has happened to Java over the last three years. Perhaps every large scale computer language evolves its own form of complexity.