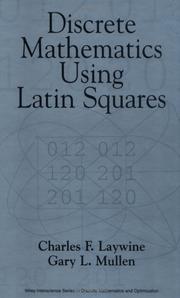 Over the centuries a considerable amount of material has built up on the subject of Latin Squares. You might be surprised how extensively they can be used.

Latin Squares, what are those? Do I hear you ask? Take a square grid (n by n) and n copies of each of n different things (numbers are usual but they do not have to be). Place the objects in the squares. The result is a Latin Square if each row and each column contains one of each of the objects. This is a simple idea and you might think it had little use outside the field of recreational mathematics. If you thought that you would be entirely wrong.

Suppose you are trying to test eight varieties of wheat. Planting eight plots is not good enough because different soil conditions, sunlight, wind etc. might influence the result. The solution is to take a large plot and divide it into 64 small plots (eight by eight). Select an eight by eight Latin Square and plant the plots accordingly. This does not gurantee to eliminate all the incidental variables but it will do a pretty good job if your original plot was reasonably uniform.

Over the centuries a considerable amount of material has built up on the subject of Latin Squares. This book presents their mathematics for student study. You might be surprised how extensively they can be used. Indeed many problems involving constraints of various kinds can be tackled with LS's as part of your tool kit.