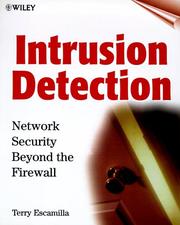 From time to time publishers bombard me with books that are somewhat off topic (Note to publishers, I am not complaining). These two books from Wiley are part of their new brand-image building set of books with white writing on red spines. Each in their own way is a fascinating read. Computer crime has been a growth industry during the last thirty years. Much of the best known instances seem not to be financially motivated but that is not to say that they are not financially damaging to the victims. In addition, those into crime for financial gain are beginning to realise that computers provide a wealth of opportunity. Fighting Computer Crime includes numerous examples of existing crime as well as speculating on what may happen over the next few years. Clearly it cannot go into details of defence mechanisms but it can and does cover areas of danger and simple steps to protect yourself.

Intrusion detection is concerned with network security. The police regularly encourage you to consider the security of your house. We all know a range of simple steps to take in that area, and I think most understand that the primary objective is to make it more attractive for criminals to go elsewhere. Banks can afford vaults with feet of reinforced concrete, steel doors inches thick, governmentscan afford even more but householders can usually only afford to deter.

The same spectrum applies to networks. You will not stop every hacker from reaching into your network so you need other lines of defence. Most important among these is prompt detection of intrusions. If all you do is connect to the Internet through a single machine you are relatively safe. But increasingly private individuals have networks. If your network is running TCP/IP what are you doing to protect it from invasion when you are connected to the Internet?

This book is aimed at larger problems than that, but as Microsoft moves us towards the concept that the Internet is just an extension of our local computer we as well as big business need to consider fitting burglar alarms.