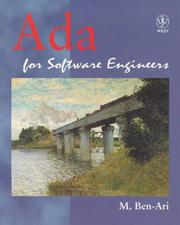 Programmers, throw off the shackles of trendiness and learn a real language :-)

I am a great believer in the benefits of being fluent in more than one programming language. It often highlights the strengths and weaknesses of ones own language of choice and can function as a source of new ideas for approaches to problem solving. Ada is not one of the most trendy languages around at the moment when compared to C++ and Java but is one of the most interesting. As its title implies, this book is aimed at working programmers and undergraduates with programming experience who need to convert their skills to Ada95.

The book contains a number of case studies which are introduced and presented in source code and then analysed with the help of extracts from the definitive Ada Reference Manual (ARM). There are no surprises or glaring errors in the material covered and it is all done in a clear and readable style. Advanced topics, such as concurrency, real-time and distributed system programming are left until the end chapters.

The appendices deal with tips to convert from language X (Pascal, C, C++ or Java) to Ada and answers to questions set in the main part of the text. The conversion tips are really just a mapping of the main concepts and constructs from one language to the other, each language being dealt with in less than three pages.

The book comes complete with a CD-ROM containing not only the example source code but also an electronic version of the ARM and the GNAT Ada compiler. The compiler installs with-out any problems on Windows 95 (the only version I was able to check) and is a quick way to be begin experimenting with your new-found knowledge.

For someone wanting to convert to Ada, this book is a good language reference, but on its own I feel it does not have enough to say about the features which make Ada a 'better' language from the design standpoint. For this I would also recommend Software Engineering with Ada by Grady Booch and Doug Bryan (3rd Ed. Benjamin/Cummings).

Programmers, throw off the shackles of trendiness and learn a real language