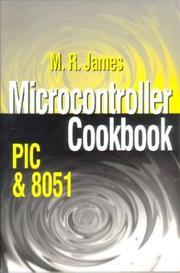 The author, by his own admission, has taken much of this book from manufacturer's application notes. However the book is aimed at students (and by implication hobbyists) who would not always have access to the manufacturers' data sheets (though URL's for the manufacturers support data are given).

The book reinforces its direction by covering two of the most common CPU types for inexpens-ive development, the 8051 and PIC. The book itself is also inexpensive. The author has set out to make a user-friendly introduction and succeeds in this very well. Many little things are explained that "All engineers know" and are not in the manufacturer's information. The small appendix covers a lot of things in this line. I would have also expected to have seen the RS232 wiring there (and infamous Null Modem) rather than hidden in the text.

There really is only one project in the book, basically a clock using a LCD and at couple of chips to interface to a radio source (for UK, USA, Germany and Japan). I might even build this one my self! It does have small diagrams of how various parts of a system would work. These can be used in one's own project but you will need to look at the manufacturers' web sites for additional data.

If you are definitely after the 8051 or the PIC (but not both) you would do better with a book on the specific type. As a "cookbook" this is a more than a little light. I would expect a larger book with many more circuits and source code. This book will be of little use to engineers. As a primer for students and hobbyists it is OK.