REVIEW - Linux in a Nutshell - A Desktop Quick Reference 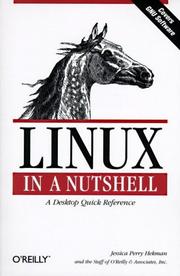 Linux in a Nutshell - A Desktop Quick Reference

This is a handy and inexpensive reference

The title of the book is misleading. It does not tell you much about Linux. This book is largely a UNIX command reference that looks at the standard Unix utilities. In fact the book is based on the O'Reilly Unix in a Nutshell. Whilst it contains much useful information on the many useful utilities in the Linux/Unix armoury it has a lot of space devoted to the old Unix favourite vi. Given that several other editors and a graphical interface (or two) is available I find this surprising.

The sections on the shells are still relevant in much the same way a dos shell is still required in Windows (but more so). Though people tend to stick with one shell, this will be a useful primer until you have decided which shell to stay with and buy the appropriate O'Reilly shell book. There is some Linux set up information but this is less than comes with Linux. Those with Unix experience will find this book superfluous.

The commands are explained in the familiar terse Unix style. The commands are sensibly grouped and sections have introductions, which compensates to some extent for the terseness of the command information. Linux users will have to realise that they are now part of the Unix community with all that that entails.

This is a handy and inexpensive reference and apart from the reservations about vi (I never liked her) this is a recommended book for Linux users who have no Unix books or experience.