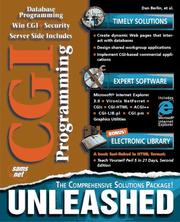 This book is published by Sams. It is for the advanced to expert user and the book is up front in stating this.

Usefully, the book starts with an explanation as to what CGI (Common Gateway Interface) can and cannot do. In doing this comparisons are made with Java applets.

Being a book for the more advanced user it assumes the user can already write (or at least understand) HTML. This allows the book to get into CGI programming sooner rather than later.

A later part of the book presents 'typical' applications (such as tracking users, order entry and shopping carts). Whilst I have never taken an application 'as is' from a book it does provide valuable insight into specific problems you might encounter. Although, with newsgroups this is not as valuable as it once might have been and the space might have been more usefully used in other ways.

The middle part of the book shows how you can write CGI applications in Visual Basic. I found it a little strange to put this topic where it was but it might be useful to some people.

Personally, I think this is a mediocre book. It might be useful for some people, but I would browse the bookshelves before deciding to buy it.