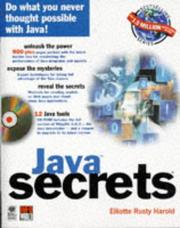 This book fails to live up to its promises. The front cover proclaims Do what you never thought possible in Java! Chapter one states this book is different. It starts where the other [Java] books stop.

The book is honest in that it warns readers that it contains material that if used will make their Java non-portable. The book is supposedly about Java 'secrets'. I had hoped for an in-depth look at obscure Java with insights into stuff that I didn't know. I was sorely disappointed. The book is basically divided into three sections: (I) How Java Works, (II) The Sun Classes and (III) Platform Dependent Java.

If you do want to write non-portable Java using the sun.* classes then this book is for you If you want to write portable Java but would like in depth details then spend your£50 on the Java Virtual Machine + Java Language Specification instead! Not recommended.