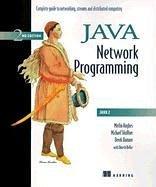 This is the second edition of the book and concentrates on Java 2. It is organised into five parts; introduction (networking, model, exceptions and multi-threading), streams, networking (client and server side, web server, datagram and multicast), alternative (RMI, CORBA and servlets) finally message streams (queuing, multiplexing and routing). For those who had the previous version of the book there are some significant differences such as the removal of cryptography, however, there is plenty of new material that is worth examining.

Assuming that you know the Java programming language you will have no trouble in getting started with Java Network programming. The text is clear and well explained, although the presentation is rather dense with the authors preferring to pack the information in rather than use more space. At just over eight hundred pages it is already a good size so that decision is understandable. The reader is taken through each part with plenty of clear small code snippets and explanation and each part builds on the previous part. By the end you have created chat clients, generic servers and clients and more... All of the example code is downloadable from their web page.

I was impressed at how easy the authors made the subject seem. My only criticism is that they interspersed short descriptions of the APIs in the relevant chapters, I would have preferred to see this descriptive material removed to relevant appendices. Alternatively, to accept that this is not a reference book and concentrate on explanations and how-tos.

In short I would recommend this book to anyone interested in starting with Java Network Programming, assuming that they have already grasped the basics of the language itself.