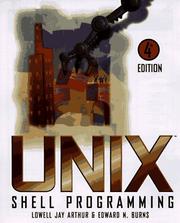 I consider this a good buy. It is as much about Unix as it is about shells.

I love Unix and I love shell programming, especially the Korn shell. There is an elegance about it, a simplicity and basic power that should be all too familiar to those programming in C. In fact one could claim that shell programming is Unix. The two are inseparable. This was brought home to me recently when I wrote a short but very useful Korn script to fax prospective customers with a company news-sheet. Not only did it send the faxes, producing a list of successes, it also detailed any failures and the reason why (unobtainable fax numbers, missing database fields, etc). Another one I wrote processes purchase orders. Never again will I have to remember account details, or mess about with text editors and blank forms. Thorough pieces of code, each of these took a day to write. I shudder to think of the time that it would take to achieve the same objectives using Windows programming or C code.

Those of you entangled with DOS/Windows are probably oblivious to this elegance and power. One of the reasons why I like the volume under review is that it shows the potential interconnection between traditional command line programming and modern GUI and HTML technologies. The authors show how HTML text can be 'driven' by command line utilities like sed, awk, grep (all of staggering power) and its relationship to the nroff processor. All this is like music to my ears.

On the down side the text is not shell specific. (My favourite on the Korn shell remains Korn Shell Programming Tutorial by Rosenberg.) Other texts are perhaps more informative because they treat each of the major shells separately; sh, ksh, csh, tcsh, bash etc. Arthur and Burns pepper their text with descriptions of how the various shells differ in that context. Still, I consider this a good buy. It is as much about Unix as it is about shells.