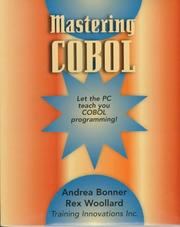 This is a useful and cheap - if verbose - PC-hosted Computer Based Training (CBT) package.

This item is a Computer Based Training (CBT) product, not a book. The technical material is based on Stern and Stern's 'Structured COBOL Programming' (8th ed.).

The review here will cover the content, utility and some CBT-related issues.

The product comes on two floppy discs and its specifications quote quite a modest platform requirement (386 / Win 3.1/95 / 5 Mb disk / 4 Mb RAM). It is supplied with a 42 page 'getting started' booklet. Interestingly, although the Stern and Stern basis is acknowledged early on, they are not credited on the packaging, as co-authors of the booklet, or even with the production team listed there.

The CBT architecture is Nth generation (N>1). It includes several useful features: student control of navigation; a glossary; configurable response personality (friendly; businesslike, or 'off-the-wall') various formats of test questioning; expert system response analysis, intended to be able to deal with a wide variety of responses; question judging is also intended to give a fine-tuned feedback in terms of hints and even review of what are judged to be problem areas. There is also a bookmark facility, a calculator and useful course/progress mapping aids.

Personally I found the architecture good and the UI adequate. Both were much better than the average for CBT. The UI was, however, somewhat disconcerting, in that somehow it didn't seem quite the familiar MS Windows, or HTML.

There is no compiler or interpreter supplied with the material - nor is the user pointed to any sources of PC-hosted execution software. Although many users will undoubtedly do their COBOL work on a main-frame, they must have access to a PC to use this CBT. Surely many might want an immediate try at writing, compiling and executing small COBOL programs? In this and other respects it seems a poor relation of products such as MS' 'Learn Visual Basic Now', where the student is able to switch easily to and from a hands- on mode by a single task button (or Alt-Tab).

Several criticisms can be made. Some might be judged major others minor. The material is aimed at beginning programmers, rather than people converting. Thus there is a lot of material on various issues of (particularly commercial) program design preceding the exposition on the relevant language syntax and use. Even so, I found much of the text verbose (like the language!) and occasionally wrong. These faults were most evident in the small section on OO. Admittedly errors here would cause least damage for the average COBOL student, but textual errors anywhere and particularly faults in the question judging and feedback are serious (especially for the lone learner) - and there were a few such faults.

There is some attempt at internationalisation, which looks as if it could be extended beyond the current choice of USA and Canada. I was less than impressed by the expert system/product QA when, at an early stage, the system refused to accept the notion of a file as providing persistent store. (It was looking for the word 'disk'.) I also experienced a very small number of problems of image rendering on my screen; and at one stage the system seemed to be short of a cosmetic .wmf file.

I personally think that, despite all its defects, it could be a useful, cheap, learning tool. For self-study it might even be more effective than a book for many of the target audience - I just do not know.

NOTE: The product is free to lecturers.

Brief Review: This is a useful and cheap - if verbose - PC-hosted Computer Based Training (CBT) package.