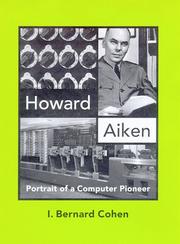 Howard Aikin was one of the early pioneers in computing. He was responsible for a series of machines called the Mark 1, Mark 2, Mark 3 and Mark 4. Actually they proved to be a cul de sac in the development of computers (some even query whether they can be classified as computers at all).

Aikin's real mark on computing was probably made through his development of computing at Harvard. There he both established a computer science course and was responsible for the architectural design called 'Harvard Architecture' where data and instructions have their own address spaces. Harvard was actually preceded by Columbia in having the first CS course but I think that Aikin's influence was immeasurable.

The first of these books is a biography of Aikin. To my mind the author focuses too much on technical issues and not enough on the man behind them. This is probably a personal view, I like biographies to tell me about the person rather than things that seem to me to be trivia. Does it really matter why Aikin designed a machine to give 23 places of accuracy? I think not. Aikin's technical work is well covered by his biographer but even the occasional anecdote fails to bring the man alive.

The second book is supposedly a collection of essays on technical issues coupled with a number of reminiscences. In fact it gives, for me, a better view of Aikin as a person.

I think the second book is a better read than the first but I did not find either grabbed my attention.