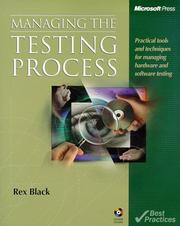 One of the things that repeatedly amazes me is the extent to which Microsoft Press manage to publish books which, if followed by Microsoft's internal development organisation, would have to be reflected in more robust products.

One of the things that repeatedly amazes me is the extent to which Microsoft Press manage to publish books which, if followed by Microsoft's internal development organisation, would have to be reflected in more robust products. This is another of those books, though this time by an author who is not a Microsoft employee.

This book is aimed at the people involved in the testing process. This is not a theoretical study but a pragmatic approach based on the author's own experience. He covers many practical aspects including supporting software and hardware. The later is easy to forget (and it is also easy to forget that software needs to be tested, at some stage, on hardware that the low end user would use.

This book would well suit the person who is going to take over the management of software testing in a company that had, perhaps, not previously provided a proper test environment. Indeed many start-up companies seem to forget that they will need a test team to work along-side their development team. Unfortunately much of the software development industry is too immature to recognise that testing is an essential part of development. At the same time too many developers consider external testing as impugning their competence rather than acting as a safety net to guarantee that the product is the best they are capable of producing.

In conclusion, if your company lacks an adequate testing system then this book could provide the basis on which one could be developed. Like all essentials, testing does not come cheap but it is time we changed the computer culture so that a failure to have proper test procedures staffed by trained personnel would be evidence of lack of due care and attention in the event that a software product caused injury or financial damage.