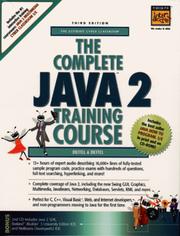 Over all this is a good package for those that wish to learn Java by themselves...

I have to confess that I am quite a fan of this father and son team's products. I remain mystified and disappointed at the lack of success of their first venture into multimedia training packs which was aimed at learning C++. They have never, as far as I know, released a second edition of that, and their straight text books on learning C++ desperately need a complete rewrite as the approach is now far removed from modern C++.

However they have met with much greater success with their Java Training packs. This is the third edition and has been updated to keep up with the growth and changes to the language. The pack consists of a book Java How to Program (the title sort of misses, their first book was C How to Program which makes sense) together with the multimedia CD. The later adds a little bit to your study but if you are not an enthusiast for this form of home study, save yourself some money by just buying the book. The book also has a CD which includes a copy of Borland's JBuilder 3, Netbeans DeveloperX2 IDE and the Java 2 SDK.

Over all this is a good package for those that wish to learn Java by themselves though a prior knowledge of some other programming language would be a marked advantage even if only simple programming with Visual BASIC.

Now to my main grouse, as far as I can determine this package requires that you be running a Microsoft Windows platform (95, 98 or NT4). Considering that one of Java's great strengths is its platform independence I find this most unfortunate. If anyone knows better I would be delighted to publish the fact (I have not got time to try it on my Linux machine as I cannot risk upsetting it as it is the link between my LAN and the Internet).

This is not a cheap product but I believe that it is good value. Anyone considering learning Java by themselves should think very carefully before letting the cost deter them from basing their learning on this book. However be warned this book is very large and it will take many months to study it in full. But Java is not, despite rumours to the contrary, a small or simple language.