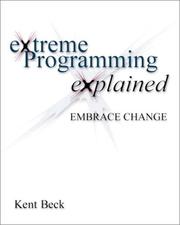 Even if you do not then adopt it, I think you will be a better programmer for having read this book.

Last year I listened to Kent Beck give a keynote on XP. I also did a three-hour workshop on the subject. I have to confess that neither particularly impressed me. I felt that the method was too like a hackers (in the original meaning of the word) dream. Reading this book has left me with a very different feeling about XP.

I think that the first thing that must be realised is that XP is not aimed at very small projects nor is it aimed at the very large nor the substantially new. It is largely about programming in well- defined areas of medium size projects. Typically, it is about products that would take half a dozen to a dozen programmers anything from a few weeks to a year. I guess the author might argue with that summary but we all like to claim more for our children than they can reasonably deliver.

I am now convinced that given the right environment coupled with commitment XP can be expected to deliver on its promises. I also think that an awareness of what it is and how it works could change your perspective on programming in a beneficial way.

This book is very readable and the author manages to be very persuasive. I found it a pleasure to read and it kept my mind active and my imagination working during much of a thirteen-hour non-stop flight from Tokyo to London.

I could spend precious words in this review telling you something about what XP is, but that is what the book is for and it will do a very much better job than I can. However, think carefully about such things as the traditional costs of change. I am sure that you have been taught that the later the change in requirements, detection of bugs, etc. the more expensive. XP, among other things, refutes that.

One of the more demanding aspects of XP is the concept that you write tests and extract test data from your clients as early as possible. Indeed much of your effort will be consumed in developing more and more tests that all your code must always pass.

You do not believe that something like this could possibly be productive? Well read the book and then talk to a few practitioners of Extreme Programming. Even if you do not then adopt it, I think you will be a better programmer for having read this book.