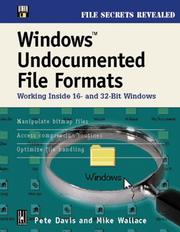 If you need to interact with Microsoft generated files then you almost certainly need this book. It is as simple as that.

Every once in a while programmers writing for a Windows environment need to know the format of such things as a Windows Help File or a Multiresolution Bitmap File . Until now there has often been only two options: find someone who knows or get hacking. The first is a matter of luck and the second can lead to some very complicated work with a large dose of intuition. There is also a small issue as to whether the format is covered by some law referring to intellectual property. The latter problem is covered in Europe if you are only wanting to determine the format for the purposes of interactvity. The law about reverse engineering software may be different elsewhere.

This book is specifically about undocumented file formats provided by Microsoft. The author is at pains to point out that he is not 'having a go' at MS, all companies do this sort of thing for a variety of reasons. However because of the widespread use of Microsoft Windows and Microsoft provided files more people can use this book than an equivalent one for something such as BEOS. Of course Linux file formats are readily available (if they are not the files will be ignored).

The introductory chapter is short but does have something to say about doing it for yourself. The remaining nine chapters cover nine of the commonest problem formats.

If you need to interact with Microsoft generated files then you almost certainly need this book. It is as simple as that. I could wish that the author had not wasted trees by including hardcopy source code but this is a continuing marketing issue, would you pay the same money for a book half the size? Well you probably would but there are many people who seem to measure value for money in terms of pages per dollar (seven in this case). The problem is that we need to educate people away from such trivial metrics. I could argue that clearly written short books are worth more than overly wordy longer ones.

If you only ever use this book once professionally you will have had value for money (hopefully, it will be your employer's money:). If it matters the file formats covered are those for .MRB, .SHG, .HLP, .ANN, .BMK, .RES, .PIF, and various compression formats, the W3 and W4 formats, and finishes with the LE file format.