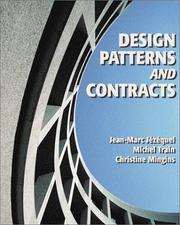 Design patterns are becoming a de facto standard, slowly, in software development. Therefore, books that include this term in their title are eye-catching, especially if combined with contracts. Contracts are an important subject in their own right and so combining that with design patterns would seem to be a sure fired way to success.

On the positive side, the book covers the GoF design patterns with code implementation examples. The explanations are short and succinct and provide a worked code example with some useful clarification. There is an overview of design patterns in a software engineering context and with contracts. Finally there are sections covering patterns and user interfaces and software configuration management.

However, there are some notable disappointments:

Overall I was disappointed with the book because I was expecting more from it. I was expecting to see design patterns, in the context of C++ or Java and the effect of applying contracts to them. At a simplistic level that would simply be code with pre and post conditions to parameters. However, I would have wanted to see a discussion going into some depth on: If the above book had been written it would have been much more useful. As it is the book has significantly less value.