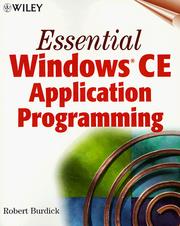 It is difficult to say who the intended audience for this book should be. The book concentrates on the core features of Windows CE. It is obviously not intended for embedded system designers as it does not cover the OEM adaptation layer or device driver layer, probably the most important aspects of CE for embedded system programmers. The author is quite honest about this, as the title suggests and does not make any pretence in this area. On the other hand, if you are coming from a Windows 95/NT background you will already be familiar with most of the chapters up to chapter twelve. The book is clearly aimed at programmers using C and does not cover other languages such as Visual Basic. It also assumes you are using the Microsoft Developer Studio.

The book has some good examples on the CD and you really need to sit down in front of your PC with the examples rather than just reading the book. The descriptions are clear and there are adequate figures and screen shots to back them up. The example templates use Windows CE API directly, which will benefit both Windows 95/NT API and MFC programmers. There are handy highlighted notes throughout the book, which highlight the differences between CE and desktop Windows. I felt that you could condense some of the chapters into just these notes.

There is a good discussion of the file system, shortfalls of CE in this area and how to compensate for this. Similarly database and registry manipulation are covered by almost a quarter of the book and discusses the shortfalls of the Windows CE data manipulation.

There are chapters that cover 'owner draw controls' and similar services which covers most of the graphical interface. It covers in quite some detail the differences between menus in CE and 95/NT. There is also some discussion on the use of DLLs for portability of your look and feel to future products. These chapters also concentrate on the fundamentals rather than trying to impress you with fancy graphics. That is your job.

I felt that as the book was aimed at C programmers it could have gone into more detail on the functions that are not available in the Windows CE libraries. It would also have been nice for an example of a conversion of an application from Windows 95/NT, with typical problems encountered. This is because most people writing applications for CE will be converting them from Desktop Applications.

Buy this book if you are simply interested in Windows CE or are a system designer and are undecided as to whether to base your project on CE or some other 32 bit API. You could use the examples as a start of your application if you are new to Windows CE.