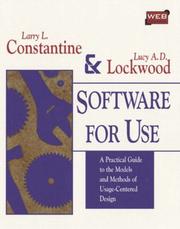 Software for Use is a weighty tome, coming in at almost 600 pages. In essence, it describes a design methodology, which is biased towards the user interface (UI) type of problem. Its authors have sought to provide a methodology that encapsulates good user interface design principles, whilst being easy to use. They also seek to address UI issues in a wide range of problem domains from embedded to Windows to Web site.

Overall the methodology struck me as one that many UI designers would benefit greatly from applying. Even initially skimming though it turned up good ideas, so an in-depth read would greatly benefit most of us. I doubt that the methodology would have a widespread use beyond the field of UI design, so the more traditional methodologies will go unchallenged. In large projects I'd consider kiting out the UI team with this methodology rather than (say) OMT which wouldn't have as much to say specifically on UI design.

I found the style somewhat repetitive at first, but eventually managed to tune this out. The idea of putting quotes from the text in large font and grey boxes (magazine style) drove me to distraction though, ruining my concentration with every turn of the page. A shame that the UI should be the biggest failing in an otherwise good book on UI design.

Would I buy another copy if someone pilfered mine? Only if I was faced with a reasonably big piece of UI design and didn't already have any books on UI design to draw from.