REVIEW - Teach Yourself to Think 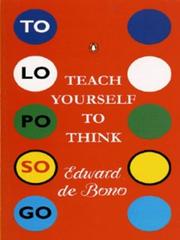 Teach Yourself to Think

Edward de Bono states that Western thought is based on the work of the Gang of Three - Socrates, Aristotle and Plato. Socrates' approach was to remove all rubbish in the hope that the result would be truth - this leads to an overly critical approach. Plato gave us his obsession with truth and the belief that truth can be established logically. Aristotle gave us a categorybased approach - the "is" and "is not" which, in software development give us substitutability, inheritance and the LSP (Liskov Substitutability Principle).

De Bono has developed frameworks for thinking - he has already written a book about his "six thinking hats" method. This book is about more conventional thinking and, for want of a better name, I call it the To-Lo-Po-So-Go framework. The names are stages of thought and, at each stage, a BPARM process is performed (Broad/Specific, Projection, Attention-directing, Recognition, Movement).

Each stage and process of the To-Lo-Po-So-Go process is explained carefully with a wealth of supporting material. At times, the book is so airily spaced, the subject matter to clearly explained that at first glance it almost appears to be trivial. I feel this book is very important in that it upgrades one of the key tools in a software developer's toolbox - her brain.