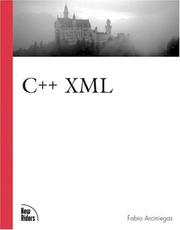 Of course XML is one of the current buzz TLA's so it was with a certain trepidation that I picked up a book with such a simple title. Add in that the publishers are not among those that immediately spring to mind and that the author's name suggests that he might not be a native English speaker and things did not look good.

Well I need not have worried. To start with the English is better than much that I have read over the last few years. (Note to self, stop judging people by their names - it is the native English speakers with Anglo Saxon names who make a hash of it).

To read this book you need a reasonable familiarity with C++. Not the sort of knowledge and skill that is needed to design a new template library, but enough to feel happy with such things as exception safety. It is also probably a good idea to have a little more than a passing knowledge of XML. You should have studied and understood at least one XML text.

Now assuming you meet those pre-requisites and feel you want to learn about integrating XML with C++ this is the best source of information that I have come across.

The book starts by reminding you of the XML basics, constructs and concepts. That is probably wise at least as a check point so that the reader knows if they need to break off and study XML a little bit further.

With that out of the way the author concludes part 1 with a chapter giving an overview of the XML technologies from a C++ perspective.

The second part of the book is six chapters covering DOM including C++ versions and SAX C++. Enthusiasts for other languages often give the impression that if you want to use either DOM or SAX you will need to abandon C++. Well this section puts them in their place. Good coverage, clearly written.

Part III of the book covers such things as XML Schema, TREX, XSLT etc. Again the focus is definitely a C++ perspective.

Part IV draws you into the heavier stuff. Chapter 13 covers creating XML-based extension languages for C++ programs. In chapter 14 we get SOAP and XML-RPC and the book concludes with a chapter on XML and databases with C++. The chapter title suggest that it will include material on DAO which worried me as ADO has largely superseded DAO but the body of the chapter only mentions ADO. Actually this is a very short chapter that is dominated by source code. I am left wondering if the author had run out of steam.

What do I think of the book as a whole? Well not bad as an overview of the field. It will help you decide if you want to go this route with XML and give you a good idea as to what is becoming available to the C++ programmer in the area of XML. If you are serious about C++ XML you will need to dig deeper than this book. However I would recommend it as a starting point. And those that are good at digesting documentation might find that after being pointed in the right direction by this book you could make progress on your own. I would be interested to hear from others if they know of a book that goes to real depth on the subject.