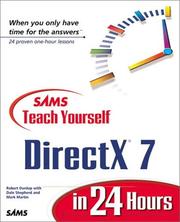 Sams Teach Yourself DirectX 7 in 24 Hours

This book covers all aspects of the DirectX interface. This includes direct draw, direct sound, 3 dimensional graphics and 3 dimensional sound. It is aimed at the experienced Visual C++ programmer, who is used to dealing with the windows message queue directly (i.e. using WINMAIN rather than the MFC). Examples are presented as text blocks, with no details of how to load then into the IDE. Microsoft C++ version 5.0 is used for all examples.

The book is presented as 24 chapters, which should each take an hour to complete. Each chapter contains an example to illustrate the techniques presented. These examples are comprehensive and adequately described by the accompanying text. The book is aimed at game developers and the examples build up to produce a mini game interface. The text is littered with tips for the budding game producer.

Many of the chapters build upon code of the previous chapter. Unfortunately, if you work through the examples changing the code as stated, the result is not a compilable application. You have to resort to the source code examples included on the accompanying CD to discover what is missing.

Another minor problem is that different code layouts are used in examples throughout the book. I assume this is due to the multitude of authors that worked on the book.

I have persevered with this book for 16 hours and I have only reached lesson 7. This is mainly due to wading through the examples attempting to make them work. The text is well written and contains all the information you need for programming DirectX. It is a well-presented and readable textbook that is marred by the examples.