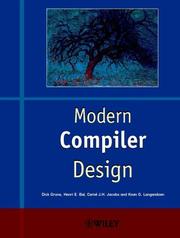 This 700-page tome is split into two distinct parts. The first deals with the various stages of compiler design from a generic viewpoint and the second contains chapters on the specific issues involved in creating compilers for various types of language.

The first part follows the design of a compiler through the various stages, starting with lexical analysis and parsing and moving on through dealing with the internal representation of a program to the issues of code generation and optimisation.

On the whole I have no major complaints about the book. The example code is generally not too bad - it is not perfect C but then this is not a book about teaching C or any other language. In fact the approach taken to the subject tends towards the theoretical rather than to practical examples - the book very much has the air of a computer science textbook and this is probably responsible for the generally dry style of writing used.

This is certainly not a book for everyone but it is a book that should be considered if you have a need for a detailed work on compiler design.