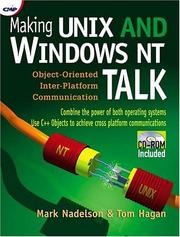 This book is not what I had expected. I was expecting something to discuss Samba and SCO's VisionFS, ftp, telnet, etc. in other words high level communications, something the super user might concern himself with. No, this volume is much more technical and certainly not for the faint hearted.

An introduction gives a flavour of the two OSs. I found a lot of the criticisms of Unix no longer true; expensive (not with Linux), complex command line syntax (not with menus and shell scripts), non-native GUI (who cares!).

The accompanying CD contains code for both Unix and NT, but I was unable to verify it. The NT stuff relies on the presence of Microsoft Visual C++ version 5.0 and the Unix stuff relies on Sun's C++ compiler. I have access to neither.

So if you are serious about C++ code to resolve domain name and IP address resolution or if you are concerned with inter-platform communication using sockets, then have a look at this title. (You'll need to be proficient with C++.) However, if your interest in automating ftp scripts, or how to bring up a Unix box in Network Neighbourhood, then look elsewhere.