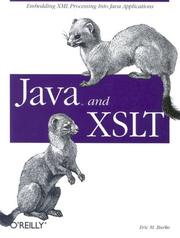 Nearly all of this book is about XML Web publishing with the aid of server-side Java. It's OK but not brilliant. Although an attempt is made to explain some things from scratch, it's really best if the reader already knows what they are because explanations are hasty in places. I also found a number of typographical errors that could stumble a beginner (such as one of the diagrams having two of its nodes swapped).

I think the book is unnecessarily big, mainly due to the frequent use of long excerpts of source code, some of which is noticeably repetitive and/or unnecessary and arguably not the best way of writing things. Some of the web design is questionable as well, particularly from the point of view of universal access (which doesn't just mean recognising Lynx). It's commendable that the author has included something on internationalisation, but it could have gone beyond writing messages in different languages, particularly given all the examples elsewhere in the book that only write dates the American way. Also, I'm amazed that the Apache Cocoon project is not mentioned in the book.

The book is a nice idea, but I hope that the next edition can improve on some of its shortcomings.