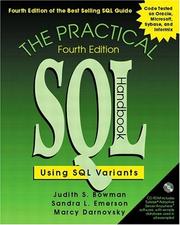 I find SQL quite easy. I think most people do. It strikes me as a simple language. After only a couple of hours even a beginner can construct some really useful queries and have data flying around all over the place!

Constructing the database is another matter. Poor design leads to poor performance, wasted space and a host of other problems. But it is not design that the current authors are concerned with, although it does get a mention. They assume, largely, that a database is already in place and their task is simply to query it.

Fair enough, the text is clear and well organised and the fact that this is fourth edition speaks volumes about the book's popularity. However there are some glaring omissions; scripting doesn't get a mention. It is as if all the code were keyed by hand at an SQL prompt. The code, it is claimed, has been tested on 'Oracle, MicroSoft, Sybase and Informix'. No mention of Unix, a single book reference to MySql! No mention of the differing environments in which SQL might run; little discussion on error reporting, security or networking; no real comparison of the SQL variants and how the called databases might differ. No mention of the possibility for programming APIs - from perl or C. Appendix E is supposed to be a full bibliography, yet Paul DuBois' classic text on MySql is nowhere to be seen. A lot of appendix space is wasted listing database data and code.

Still, for someone interested primarily in Sybase (the accompanying CD is concerned only with that) and a gentle introduction this book might be worth considering. However, I suspect it is now dated and that there are better books out there; Du Bois for one. Besides, MySql is free!

Oh and guess what, the main database example they use is one of books - titles, authors, publishers, prices - not much originality in that is there?Non-Programming