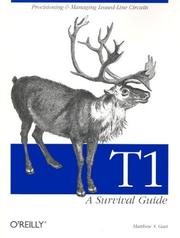 If you need to know T1 for data networking in detail, even infrequently, then this book belongs on your bookshelf. In reading the book from cover to cover I couldn't spot anything obviously missing.

However, it will be a must-have book for only a small number of engineers and that number is diminishing each year. The intended audience is described in the preface; This book maintains a blatant and sometimes overwhelming, focus on the U.S. This book approaches T1 from the narrow perspective of data networking. This is not surprising as T1 is only used in North America and a small number of Pacific Rim countries _ it has little information for readers outside those territories, nor for the voice telecomm engineer. Even in the U.S. the 1.5Mbit/s T1 as a medium-speed data access transport is beingdisplaced by newer and cheaper technologies such as cable, xDSL and terrestrial radio and satellite.

The book does contain some subjects with wider appeal, such as the chapters on HDLC, PPP and frame-relay, but it is not worth purchasing the book just for these.