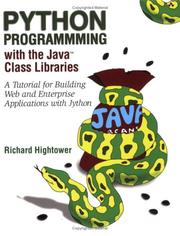 The sub-title is A Tutorial for Building Web and Enterprise Applications with Jython . That is a pretty good summary of this book as long as the reader understands that it is about a particular version of Python designed to run on a JVM. This version is often called Jython.

The book is a well-presented text for newcomers. The competent C++ programmer can skip the first few chapters that are concerned with really basic stuff. By the time we reach chapter eight we are ready to start exploring some of the power that lies under the Python hood in general and the Jython one in particular.

The point about Jython is that it compiles down to Java bytecode (or, as is common for simple Python, it can be directly interpreted as bytecode, which is an interesting idea because we finish up with an interpreter sitting on top of an interpreter, Python interpreted into bytecode which is then interpreted by the JVM). The great advantage of this is that the Java Libraries are also compiled to bytecode. The JVM does not care where bytecode comes from; it simply interprets it (or if you have a JIT, it compiles it on the fly). This means that as long as we can tell Python what a Java API provides we can mix Python with Java libraries. This is the reason for the title of this book.

If you have some programming experience (if not, I think something such as 'Learning Python' would be a better start) and want to explore the potential for using Jython for developing Web and Enterprise applications this book would be a good place to start. There is much more to Python than is covered in this book so do not assume that it will turn you into a Python expert. However if you put in the hours of study this book will help you realise the potential of Jython for simple to intermediate applications.