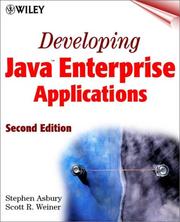 This second edition includes the latest versions of the Enterprise Libraries and is targeted at version 1.3 of the J2EE. Inclusions, which did not appear in the first edition, include CORBA, XML and JavaMail.

The author tells us that all the code has been tested on NT and Windows 2000 but as pure Java has been used in all cases, the examples should run on all platforms - the basic idea of Java.

Updates to the code and errata are available at on a website, which was, when I visited, a single page.

The book is designed so each technology is introduced across a number of chapters. The first of which explains the underlying concepts and any parallels with other technologies, followed by the programming techniques and then finishing with a chapter using the technologies to solve a problem.

There are two longer chapters that have complete working examples, including a 4 tier Online Store that uses JSPs and servlets to define a Web page interface, servlets to manage the shopping carts and JavaBeans to access a database.

This book is a good starting point for someone wishing to understand some of the technologies available in the world of Java.