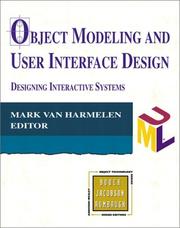 When I received this book I was very excited as I have a keen interest in both UML and user-interface design, having spent many years designing GUIs for industrial machinery using C++ and UML. My excitement soon turned to disappointment when I realised that this book was not what I had been hoping for. I was hoping for a nice structured walkthrough of developing user interfaces with UML. What I was presented with instead were 10 chapters by different authors with varying amounts of theory and examples.

I found the book very difficult to read and did not actually finish several of the chapters because they were either extremely hard going or a thinly disguised advert for a particular product. If I buy a book to learn how to use UML for a specific task I do not expect to then have to buy a specific application when I already have numerous UML editors.

The latter chapters in the book (especially chapter 9 - Toward Unified Models in User-Centred and Object-Oriented Design) were much better with quite a few nuggets of information gleaned.

The book is definitely written for someone after academic, as apposed to hands-on, information. Users, or potential users, of particular products (Idiom, OVID) may find it more interesting than most with various product comparisons scattered throughout.

Would I buy the book? No. I was expecting tools that I could use on a day-to-day basis but instead received some well written but, for me, mostly irrelevant information. Please bear this in mind if thinking of purchasing the book, especially if you are after a more academic read.