REVIEW - Making Use of PHP 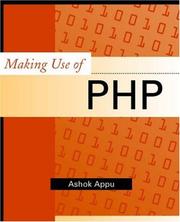 Making Use of PHP

Over the years I have grown to expect a high standard from this publisher. Sadly this book falls short of my expectations, on both technical and teaching levels.

The book is aimed at basic (with a small b) programmers and as such should present valid code and begin to instil good practice. There is a discussion of string handling in PHP which a) shows that no one ran the code examples and b) shows that Appu does not understand how to handle nested quote marks. A couple of pages on and the if construct is described. Again the syntax is incorrect (missing brackets) and the equality operator is given as '= ='. The whole book is riddled with such errors.

The code examples are hung around the premise of building a web site for a CD Music store. Each problem is stated, a task list drawn up, the snippets of code discussed and then the solution is presented. The issue I have is that most of the tasks that Appu selected to code in PHP are best done on a calculator - for example 'Mega Music Mart want to calculate its profit or loss for September. It earned $6,000 dollars (sic) in the month and had expenses of $4,000. The development team need to write a code (sic) to do the calculation.' Even allowing for this appearing very early in the book, this is a very poor example and the quality of the tasks does not improve.

Appu does not address defensive programming - validating user input and/or ensuring user input is not going to harm you (the classic example of an input field being applied directly to an SQL where clause). The final straw was when Appu asks the student to open up the permissions on the home directory. He says that this isBAD THING to do, but does it to demonstrate directory functions.