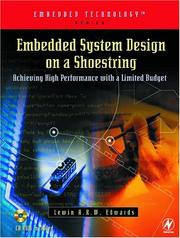 The title is a little misleading as it is not a general embedded book. It is specifically on the ARM7 using Linux and Gnu. To use this book you will also need the Atmel AT91EB40 evaluation board. Actually this book will probably end up being supplied with the Atmel kit so check with your Atmel supplier before buying the book. That said, the first two chapters, about a third of the book, are very good advice for all embedded developers. After that it goes in to Cygwin and the Gnu tool chain for the middle third of the book, which restricts its usefulness a little, and the final third of the book is debugging on the ARM7 AT91EB40 board. My resident ARM engineer said it was not bad as an introduction to the Gnu tool chain.

It is a relatively short book; I have longer texts on my web site (but not on this specific subject). I was not taken by the book when I first looked through it, since much of the information is in the Gnu tool chain manuals and other freely available places; but then again so is almost everything else if you look for it. I warmed to it more when I read the first two chapters as these have a lot of useful information for the student (and indeed new working engineers) on how to make decisions in industry. This is not the same as the theoretical choice you might make in academia. There are some very useful tips on some pitfalls that could kill a project.

The author bought all the equipment personally without telling the suppliers it was for a book. Thus he knows the real costs and the level of support available to the average user. If the author could add more meat to the book and some more advanced topics it would be a good book. That is not to say there are not some useful things in it now, writing to flash for one. That is always one of the first problem areas to be encountered after you get the compiler to actually compile something.

From the comments in the initial chapters the author certainly understands the industry. Also whilst this book (written in the US) is, like most, US-centric, the author (an Australian) has made the book accessible to others. I like the style and way the book is written. As a plus point the full text is on the CD as a PDF. A very good idea and a brave decision by the publishers.

However I do not think that there are enough plus points to warrant buying this book unless you have the Atmel kit. As an addition to the Atmel kit it would be perfect. So on the whole, sadly, only recommended for Atmel EB40 users. Note to author; please do an expanded second edition!