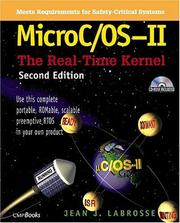 for most users who want an OS to use and experiment with this book will fit the bill.

MicroC/OSII is an RTOS with the entire source available as part of the package. Whilst it is free for most of us, including colleges and universities, there is a licence if you want to use it commercially, which seems fair. See

So why use this instead of Linux or any of the others? MicroC/OS has been designed as a small footprint real time, pre-emptive OS that was designed for embedded use on 8 bit platforms upwards. It has also been approved for use in a DO-178B aerospace system and is (apparently) MISRA-C compliant.

Accompanying the book is a web site where people post ports to other CPUs, the executable in the book is for x86. There are many ports and you will often be faced with a choice of ports to any processor you choose (8051 to ARM). These are all free and donated by their authors. Due to the modular form of the design only a few well-defined files need changing for most ports.

The book itself is a heavy 600-page hardback. Much the same size as the 500-page first edition but there are a lot of changes. Most of the source code has been dropped, as has the chapter on porting from the first version of the RTOS. There has been a major expansion on inter-task communications and synchronisation. The software itself has gained mutexs.

In explaining the API and rtos the book does a good job of explaining how, in general, an OS works. This is achieved via diagrams and extracts of code. The main manuals for the OS are on the CD in pdf form. The book itself has a guide to the chapters showing what to read for Concepts, Structure, synchronisation, communications, porting and the user manual. In short it is a complete RTOS kit. Students and lecturers will find this book very useful. That said I know of a least one serious commercial development using MicroC/OSII in a serious embedded system.

The book is an excellent entry into operating systems. You will need another book if you really want to go deep into the theory of operating systems, but for most users who want an OS to use and experiment with this book will fit the bill. Highly recommended