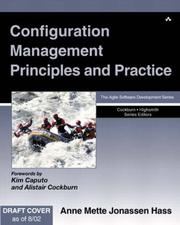 Configuration management, or version control as it is sometimes known, is an area that is often overlooked by programmers. It is regarded in the same light as documentation, procedures and testing. However it is a very important part of any project. This has become more apparent with the Linux community; which has many people independently working on many versions of the system. Though the principles also apply to a one-man one-computer project. Comprehensive is the word I would use to describe this book as it covers the whole subject almost to the point of project control. I don't think the book is aimed at the one-man project unless he has lots of small projects.

Although I am a great fan of configuration management I found this book surprisingly heavy going. Whilst it defines everything in minute detail, the definitions are wide and often completely open. There is a lot of it may be this or this and this and additional things may be added. Some things appeared to be stating the obvious. I found myself sinking into a morass rather than a clear direction.

For example, one area of confusion is that version control is not configuration management. CM is a lot more than just version control. This is fine if the book stopped there and laid down some rules. The problem is that the book then goes on to say; it is up to you how you define the two terms and that in some companies they are used interchangeably without any problems. The author should have clearly stated a method and stuck with it.

I was surprised to find the 'general principles' section was chapter 15! I did try to like this book and did find useful information in it, the W-model for one thing, though this was a just a diagram with virtually no explanation.

On reflection this is more of an academic (not teaching) discussion on CM rather than an engineering book. All the information is there, it is jut not clearly and easily accessible. I think this is a pity. This book could do with a re-edit to make it more accessible to team and project leaders. I would hope that the author does this as a good [readable] book on CM should be on every software engineer's bookshelf.