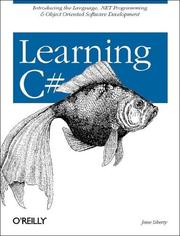 Overall, I would give this a recommended rating. For£25, it is a fairly good introduction to C#.

The C# language has its heritage in C++ and Java and if you are familiar with either (or both) of these languages, you should be able to pick up C# without a problem. If you are a linux user, then you can still make use of the book as just about every example is compilable using mcs/mono from Ximian Inc.

If you are new to OOP, then you will have problems as the description of OOP and its principles are not clearly explained. A newcomer would be better off with a basic OOP book in either Java or C++, then come back to this to learn C#.

The book is well written and very clear in both writing style and chapter objectives. The only problems come in some very important parts, which are not fully explained. For instance both void Main() and

are used, but it is never explained when you would use the differing return types. Fortunately, this sort of problem does not occur too often.

The additions to the language over C++ and Java are well described and make the basis of OOP a lot simpler. One of the simplest, yet best ideas is that all variables have to be initialised the compiler will not compile any source where a variable is not initialised (unless the out modifier is used). Passing by reference is made clear by use of 'ref' instead of&

The main problems I have with the book are three-fold.

Unusually for a programming book, there is a comprehensive appendix giving definitions to C# keywords. It is more usual to just have a listing of the keywords. I suppose that it is because the language is new.

Overall, I would give this a recommended rating. For£25, it is a fairly good introduction to C#.