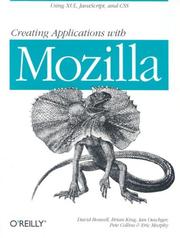 Often I choose books to review because they seem relevant to the work I am doing at the time. Only recently I downloaded and compiled a copy of the Mozilla browser (from

). I was prompted by pure curiosity and by the desire for something more modern than my old Netscape 4.7. Some web sites strike me as being unfriendly to Netscape. Its 4.7 version, at least, doesn't contain some 'essential' new features. I'd hoped that Mozilla would ease this difficulty. I do use it, but only occasionally. The text based browser lynx still remains my favourite.

I assumed then that this book was concerned with extending Mozilla (qua browser) in some way. I thought I could add some new features - perhaps make it simpler. In a sense I was correct, but making those changes is complex and not for the faint hearted. Mozilla is much more than a mere browser. It is a complete GUI application development platform. According to the authors it enables programmers to develop cross platform applications that will run anywhere that Mozilla itself will run. (Strange, all the examples quoted are either browsers or chat programs!) It uses a front end called XPFE, itself making use of web standards like CSS, JavaScript and XML. 'JavaScript creates the functionality of a Mozilla-based application, Cascading Style Sheets format the look and feel and XUL creates the application's structure.' Readers need to be versed in all of these.

In other words, we write the code in XUL. Here is an hello.xul example:

In Mozilla I can click on this code and it magically executes. Good fun this. The text has lots of such examples. XPFE is similar to DHTML, but has the ability to develop stand-alone applications.

The authors claim that the XPFE learning curve is a lot less steep than the alternatives; C, C++ and Java.

On the one hand this book will have a limited readership. This is new and possibly volatile technology, which may very well be a flop. W3C still haven't approved some of the standards. Mozilla is the open source face of Netscape, which has been taken over by AOL.

On the other hand, there is little else out there. (All I could find was; Netscape Mozilla Source Code Guide - William R. Stanek.) Geeks will pull the text and sources down from the O'Reilly web site (

). For anyone else: there's little choice. So if you're interested in Mozilla and XPFE, then this is probably a good buy. It is written and produced to the usual O'Reilly standards.

As a unix purist my suspicions of this technology (not the book) are that this is another addition to the bloatware movement. We're building castles in the air!