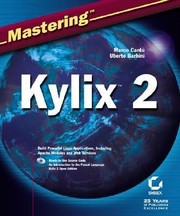 Going by the title, it would appear that this book was already out of date when I received it, since version 3 of Kylix, the Linux port of Borland's Delphi, had been available for some time. However although Kylix 3 is probably of more interest to ACCU members generally, since it includes C++ as well as the Pascal-based Delphi language, it seems that this addition is the major part of the upgrade and you can use this book very well to learn the Delphi part of the package. Furthermore the authors have not released a Kylix 3 edition of the book, presumably because they are Delphi experts not C++ experts.

The book is not for the beginner. It is well-written, in an easy-to-read style but assumes a degree of familiarity with programming. Naturally this would not be a problem for ACCU members. It does start with a brief technical introduction to Linux, which is somewhat superfluous, since I believe anyone contemplating writing software for Linux would probably already know at least the basics, which are all that this introduction covers anyway. If you need to learn about Linux before beginning Kylix programming I recommend getting a book on Linux or a knowledgeable friend.

Next in the book comes a description of the IDE and the structure of a Kylix project. This is done well, with plenty of information including a surprisingly long table containing a description of every file type produced by the system.

The next couple of chapters cover the Object Pascal language and object-oriented features. Frankly, to a C++ programmer there are not too many surprises. Everything you expect is there, with plenty of examples. Most programmers would not have any problems with this.

Now, the more important parts of the standard libraries and, since this is a graphical programming product, the visual (QT-based) programming facilities. Again, there are plenty of examples covering components, events, forms, database programming and so on, until the (almost obligatory these days) web and XML section.

The book has been ported, if that's the right word, from the authors' Delphi book and given that Kylix is heavily based on Delphi that's no bad thing, although it does show in places. However there are plenty of Linux-specifics and sections on, for example, the X window system and Linux-style shared libraries.

A CD is provided containing the Open edition of Kylix (containing less features than the paid-for edition, which the book points out where necessary), source code, free books on Object Pascal and SQL (in PDF format) and other software including Interbase.

In conclusion, I would recommend this book to anyone contemplating beginning development using Kylix.Development Support& Methodologies