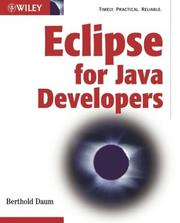 This book aims to give a broad overview of the Eclipse platform, and as such is divided into three sections. The first of these covers the use of Eclipse as a Java IDE, including the refactoring and code generation features. The second part describes the SWT and JFace toolkits, and the third details the creation of Eclipse plug-ins. It follows that the book in its entirety is useful only to those who want to create such plug-ins. For anyone using Eclipse purely as an IDE, only the first hundred pages are relevant.

The overview of the IDE is somewhat useful, although I do not expect that experienced users will refer to it frequently.

Some areas are touched on only briefly - the debugger receives a mere 8 pages. The coverage of the SWT and JFace toolkits is thorough. The brief comparison between AWT/Swing and SWT/JFace is concise and quite instructive.

Both the GUI toolkits and the plug-in system are illustrated by large examples (a MP3 player and a spell-checker, respectively). However, Eclipse version 3 is now available, and some of the changes cause problems. For example, the second example crashes because of a change in a core Eclipse library.

The text itself is far from sparkling. There are few actual language errors (oddly enough, the Introduction contains relatively many) but the writing is very drab and lacking in zest. The book is consequently tedious to read.

If your interest in Eclipse is only as an IDE, then this book will not be a worthwhile purchase. If you are interested in Eclipse plug-in development, or at least in SWT and JFace, then it may be of use. There are several similar books available, however, and I would suggest investigating those first. I can find little reason to condemn this book, but little to recommend it either.